Although the global market for computer graphics is led by a few established multination players, such as Intel Corp., Nvidia Corp., Sony Corp., Siemens, Adobe, Microsoft, and Autodesk Inc., it demonstrates a fragmented competitive landscape due to the stronghold of local participants in regional pockets, states a new research report by Transparency Market Research (TMR). Over the coming years, with many players opting for mergers, acquisitions, and strategic agreements to strengthen their positions, the competition in this market is anticipated to intensify significantly. The low entry barriers for new players, thanks to the low cost and easy availability of labor, especially in emerging economies, will further increase the level of competition in this market in the near future, states the research report.

According to TMR, the opportunity in the worldwide market for computer graphics, which stood at US$130.9 bn in 2015, will be progressing at a CAGR of 5.50% during the period from 2016 to 2024 and reach US$211.60 bn by the end of the forecast period. The demand for hardware components is greater than the software components and this trend is expected to remain so in the near future. Image processing, CAD, entertainment, and user interfaces have surfaced as the key application areas for computer graphics. On the geographical forefront, the global computer graphics market is dominated by North America. With the presence of key visual effect providers in the U.S. and Canada, this regional market is anticipated to continue on the top over the next few years, notes the study. 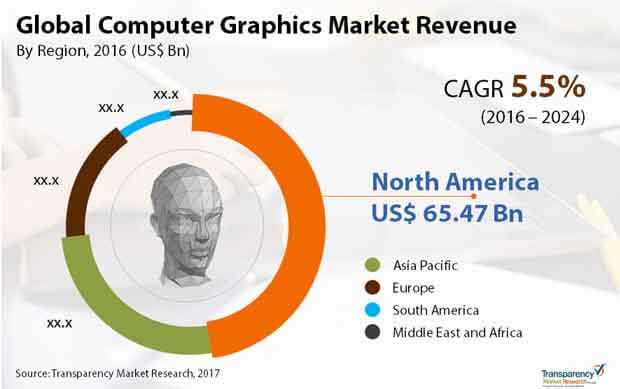 “The global market for computer graphics has witnessed an exceptional upswing in its valuation over the recent past, thanks to the remarkable boom in the gaming industry,” says an analyst at TMR. “The significant rise in the media and entertainment industry is also fuelling the demand for computer graphics, reflecting positively on this market,” she added.

For More Details, Request A Sample Report at https://www.transparencymarketresearch.com/sample/sample.php?flag=S&rep_id=2740

The augmenting usage of 3D animation effects and image processing in various media and entertainment applications and the fueling demand for computer graphics software in several end-use industries, such as automobile, construction, fashion designing, and other manufacturing sectors are expected to propel this market in the years to come, reports the study.

High Cost to Act as Deterrent in Market’s Growth

On the flip side, the need for replacing hardware, owing to continuous upgrades in 3D graphic software, resulting in additional cost may hamper the growth of the global computer graphics market in the years to come. The high cost of computer graphic software may also slowdown the market over the forthcoming years. However, the technological advancements and the high and continuously rising interest of young people in computer games are projected to normalize the effects of these deterrents in the near future, leading to a considerable rise in the worldwide market for computer graphics, states the research report.